Stories for Children and Teenagers in Mannerism

1. Story of an Orphan Prince and his destiny

Story of a prince who was an orphan [his mum passed away when he was a child], raised by step mother, and no one could catch his heart in depth except one woman! See the slides above. In Islam when an infant is born, an angle asks God: What should be his name? What should be his job? Who is his/her spouse/-s and when is the time and date of his/her death? Then after God answered to the questions of the angle, the angle writes the answers in the book of destiny of this infant. It appears that Prince Harry who had met several girls before his today's wife, left those girls, but he did not leave this lady called: Megan Markle. Several Journalists tried to bring reasons why Megan does not match with Prince Harry, such as their child could be tinted, or the relatives are not as high as Prince Harry's ones, or the brother is not of high health and status, Megan is three years older than the prince, or previously she married and was divorced, actress News was embarrassing, etc. However Allah closed the mouth of all people and today [May 19th, 2018] stamped the destiny of Prince Harry with Megan Markle to be done in a beautiful castle Chapel in UK. The love story was like other love stories, started in an event both were there at the right time, and took some time to get permission of the UK Queen [grand mother of Prince Harry], pass several priority events, waiting and eventually Allah made the destiny of Prince Harry and Megan to be stamped in the same book where Harry's destiny for marriage was recorded by the angle at Harry's birth time.
Also the following link is about passages of Bible related to "Love", etc.:
​Wedding Biblical Passages

Courtship of the bride and groom - video

Reference for the slides: www.msn.com

2. Story of the Princess, who died before the wedding of her son-Respect For mothers

There was a princess in England who had two sons and the youngest one was called Harry. Harry was twelve years old when his mother Dianna died. This lovely handsome prince grew up to his 30's and then fell in love with a beautiful lady and married. The couple were trying to plan for their wedding as best as they could with several option for interior and exterior of the castle and chapel they were going to get married there. Prince Harry, the groom and his bride Princess Megan they sat down and thought how to decorate the chapel in the castle?
Prince Harry loved his mother and when he remembered her mother's memories, he felt sad and emotional, as his mother suddenly died in an a car accident and he was only 12 years old. Prince Harry said that his mother was a whole mother, as she sat down and played with him and his brother until the play was completely finished. She never left playing with him to do another more important task. So Harry enjoyed playing with his mum and remembered how nice Princess Diana his mum treated her as her son!
Therefore when Harry and Megan decided how to decorate the castle of the wedding venue, they decided to decorate the castle walls at entrance with a few flowers the mother, Princes Diana loved.
This beautiful decoration was so charming for all mothers, who participated in the wedding ceremony for the new married prince Harry. Also many other mothers felt heart broken in the world. Shi'a Islam through the teaching of the progenies of the prophet of Islam has a great teaching for respect for mothers. "Heaven is under the feet of mothers" is a tradition from Prophet Muhammad [s.a.]. Princess Diana also respected Holy Qur'an and kept this book in her bedside table after her divorce and when she was engaged to a Muslim man.
​The following link and photo is the decoration of the chapel walls in a castle where prince Harry and Megan decorated:

3. Decoration of the Chapel Walls in the memory of the groom's mother with mum's favourite flowers 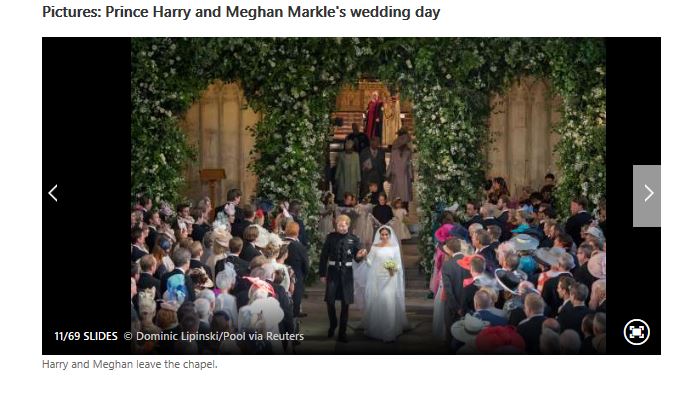 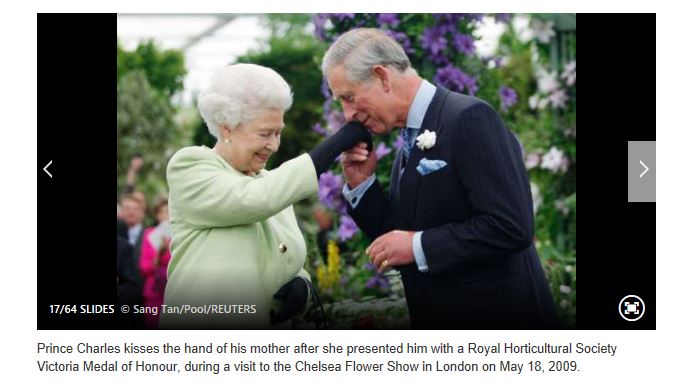 4. Story of a Crown Prince who listened to his mum and kissed her hand when she gave him a present:

​
5. President Putin of Russia issued an Order for the Parental Glory-Respect for both Parents.

​6. Story of Hazrate Yunos in the stomach of the Wale-Video

7. One example of accusation manner is President Trump calling Trudeau weak and dishonest, which is a rude and false accusation, instead Trudeau is very sensitive, polite and supporter of oppressed people.

8. When infants are 3 months old in Christianity family gather together and start dropping water on the head of the infant called Christening. In Islam at about same age when the first head hair of the infant grew and they could cut it with scissors, they put the hair into a little bag, weigh it and equal to the weight of this hair, they pay gold to poor so when baby grows, he be insured for accidents of life divinely. This link shows British royals christening their third child at the age of 3 months.

​9. Story of a cricketer Coach who cheated by sand paper, ball, etc. for winning

10. Story of a President who made fun of a Prime Minister in another country. He was not warmly welcomed by the royal family who supported that Prime Minister! Protestant [Islamically affected in middle age wars] faith of the royal family and the Catholic faith of the president [hard liner sect of Christianity with no tolerance for Islamic divorce] has cooled the royals. Welcome both royals and president to Shi'a Islam for union of all Christian denominations!

11. eLearning in Australian modern Prison has corrected offenders' manner, statistics proves. No. # 10. Shi'a Islamic Commandment for compulsory Practices: "Amir Bil Ma`arouf and Nahyi anil Munkar" = "Order Stupids to traditional education and Forbid them of Crimes".
12. While Russians, Iranians and N. Koreans are busy threatening US and so are Americans threatening these three countries and putting sanctions on them, New Zealanders appear to be more Islamic than the 4 countries. New Zealander by using ink instead of blood has taken a profitable business against President trump by painting his image on toilet paper and this sale is considered a holy war under Islam, as it is done by ink not by sword. This is more valuable in Islam to fight by ink and by pen rather than by missiles and killing people! In this funny cold war the fighter makes money, nobody gets killed and the intention of seller is the same as the intention of those, who fight with missiles!!! Good manner NOT to fight with blood but by ink!

13. Story of a Duchess whose first job was taking the Trash! Value of being Humble in Islam

14. King of England Prince Charles, does not like to tell people this is what he told them..., he collects opinions and tries to fix his countries' policies regularly using those opinions, he respects women of other races as his in-laws, he put his ban on environmental hazards such drinking-straw, he walks one hour after each dinner, he reads letters which people sent to him, every day, he has a charity trust which helps a very big number unemployed people, ….

15. SCOMO, PM of Australia raised funding issue for those who corrupt the government decisions and asked for increased integrity in Australian burocratic system by extra funding